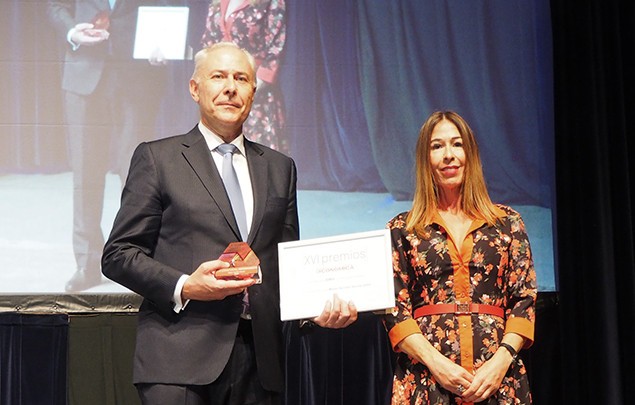 The 16th edition of the award ceremony presented by Castilla y León Económica was held recently in the Spanish city of Valladolid, with GMV announced as the winner in the “Best Social Action” category. On November 3rd, the business publication Castilla y León Económica held its annual award ceremony, which recognizes outstanding business management and initiatives that are contributing to development of the Spanish region of Castile and León.Ignacio Ramos Gorostiola, GMV's People Strategy and Infrastructure Corporate Director collected the award in the name of the company.

GMV’s mission is focused on innovation as a way to directly or indirectly contribute to progress and added value for society. Economic growth and business development have positive repercussions for society as a whole, and this is why GMV considers responsible social, economic and environmental values to be a fundamental basis for its activities and conduct as a company.

The unfortunate events that society has been facing during recent years, with situations of crisis for economies and public health, have worsened the inequality gap among communities, with the business world’s ability to react being put to the test at the global scale. This reality has required increased attention to be given to addressing social, economic, and environmental issues. In this context, GMV has demonstrated its commitment to society through a variety of activities involving its entire workforce, putting its corporate culture and values on display, including, most importantly, generosity, charitability, cooperation and commitment.

The recognition that Castilla y León Económica has given to GMV has highlighted the company’s participation in social responsibility actions and collaboration with charitable projects during the last two years. Some of the most notable of these include the various charitable initiatives dedicated to mitigating the effects of the COVID‑19 pandemic and the conflict in Ukraine, with participation by GMV as a company, as well as by its employees on a personal basis.

In 2021, GMV established its first collaboration with the Food Bank charity, which was especially motivated by the circumstances of economic crisis and food insecurity caused by the coronavirus pandemic. A total of €50,000 was donated, for providing food to those in need. This charitable initiative was launched again in 2022, and €50,000 was donated again, thanks to the collaboration of GMV and its employees.

In response to the humanitarian crisis arising from the conflict in Ukraine, in April 2022, GMV launched a campaign in cooperation with the United Nations Refugee Agency (UNHCR). This goal in this case was to raise a total of €40,000 to help provide housing and shelter for the thousands of families displaced by the crisis in that country. In the end, the response was outstanding, and it allowed that charitable goal to be exceeded with more than €41,500 in donations collected even before the end of the established time period.

GMV’s commitment in other areas such as education is also worth emphasizing. With the aim of supporting education and vocational training in science and technology, and to encourage knowledge transfer between universities and companies, GMV forms collaborations each year with schools and universities, offering educational grants, internships, and academic orientation sessions, among other activities.

In addition, as a way of demonstrating its commitment to sustainable development, GMV joined the international initiative known as the United Nations Global Compact in 2022. This is another demonstration of how GMV continues to pursue its goal of sustainability in business, with activities focused on the UN’s Sustainable Development Goals (SDGs).

For this year’s 16th edition of the Castilla y León Económica business awards, there were 1,241 nominations submitted. There were a total of 9 awards presented during the ceremony, one in each of the following categories: Best Social Action, Best Strategy in Foreign Markets, Best Business Operation, Most Innovative Product, Best Communication Strategy, Best Human Resource Management, Best Environmental Sustainability Strategy, Best Rural Company, and Best Youth Company. There was also an honorable mention awarded to a businessperson whose management has been notable for generating employment and economic growth in the region of Castile and León.

The panel of judges for the awards included representatives from La Caixa, the Global Reporting Initiative (GRI), the Valladolid Association of Economists, the Castile and León regional government, and Castilla y León Económica itself, among others.