Third meeting of the PROMENADE consortium

In late September, the city of Rome, Italy, hosted the third meeting of the PROMENADE project. Border surveillance experts and professionals met to discuss the results obtained and the measures adopted following the project's mid-term review.

During the two-day meeting, the partners presented the progress of their work and outlined the future actions they would be taking through the end of the project. They also spoke about the actions they would be taking in response to the comments received by the Commission. GMV analyzed those related to the architecture package (WP3), where the company is in charge of defining the high-level architecture and design for the big data and artificial intelligence services.

The project is currently in the testing and integration phase, so the system testing plans were also discussed. GMV is responsible for the integration platform where all the systems will be deployed, as well as for assessing the testing process itself.

The meeting also addressed the details of future trials. Specifically, GMV is involved in the third trial, with the Guardia Civil (Spanish Civil Guard) as the end user, planned for February 2023.

As the Innovation lead for PROMENADE, David Merino, head of GMV’s Defense Maritime Surveillance division, gave a presentation at the meeting that illustrated the importance of innovation in projects of this type. With the participation of key end users, he also analyzed the innovation that this project covers at the operational level, along with the benefits of PROMENADE in the day-to-day work in the area of maritime surveillance.

Launched in October 2021, PROMENADE (ImPROved Maritime awarENess by means of AI and BD mEthods) is a project focused on collaboration and R&D, co‑funded by the European Union as part of its Horizon 2020 framework program. The project’s objective is to improve the systems used to track maritime vessels and to develop tools that can automatically detect anomalous behavior.

GMV is responsible for project solution design, developing services for satellite imagery merging, exploitation, and analysis. GMV is also the technological leader for the Spanish military, and the company will be working with top officials from the country’s Customs and Borders service and Civil Guard police force, through implementation of PROMENADE services that can be displayed in Socrates. 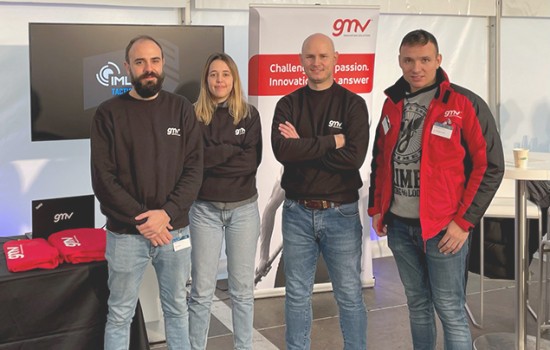 GMV presents its extensive catalog of solutions, products, and services at Eurosatory