The Ley de Apoyo a los Emprendedores y su Internacionalización  (*) (Entrepreneurial and Internationalization Support Law), whose anteproyecto de ley (bill or draft law) was presented only a few weeks ago, is probably one of the most eagerly awaited legislative initiatives of the Spanish government. It was one of the main planks of the governing Spanish political party Partido Popular’s election manifesto, and has been persistently called for since the very start of its administration. We can only agree with its basic premise: reactivating the Spanish economy, a sin qua non of job creation, can be driven only by private entrepreneurial initiative acting under conditions of free competition. The Spanish government is therefore bound to create the best conditions for this initiative to prosper. During this long-drawn-out crisis the streamlining of Spain’s financial sector and the balancing of the government’s books have tended to hog the headlines, perhaps downplaying other factors of equal or even greater importance to the Spanish people: the mass destruction of firms and jobs. Restoring some sort of basic balance in public finances and the financial sector is a necessary but not sufficient condition for returning to a sustainable model of economic growth in keeping with the aspirations of the Spanish people. 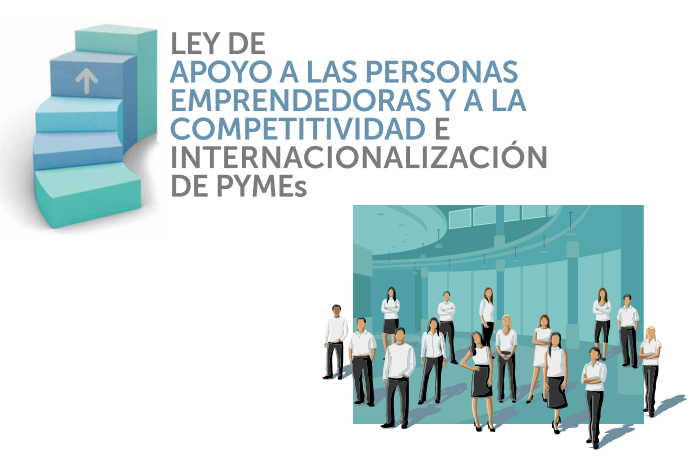 There are many ways in which any government might tackle the task of rekindling business entrepreneurship. A whole clutch of factors like the financial and investment environment, taxation procedures, cutting down red tape, labor regulations, incentives for business innovation and internationalization, education and training, international mobility, etc, make up such a diverse framework of action that they not only open up many fronts to work on but also make it all the more likely for the resulting law to be a complex affair straddling over many different legislative spheres. This is even more so in this particular case because the anteproyecto addresses not only the creation and development of new companies but also takes in a whole raft of measures that affect existing companies too. Whether this ambition is a strength or weakness is a moot point from a legal drafting point of view. To our way of thinking the crucial point is for stress to be laid on the most critical factors for driving entrepreneurial activity with sustainable growth and job-generation potential. Self-employment, for example, which might well be part of the solution, should not be solely identified with entrepreneurship as the be-all-and-end-all. The spotlight has to be focused firmly on business projects with real growth and added-value potential and, ideally, export-targeted.

In our opinion, without ignoring other sectors, Spain’s economy needs a bigger industrial component, driven by companies of a bigger average size than the ones today, highly innovative and with exporting capacity, whether these are new firms or the result of developing and nurturing the existing industrial base. A high technological content and innovation capacity are factors that would endow these firms with a high added value per employee and sustainable competitiveness not based on low wages. Sadly the R&D investment trend in both the public and private sectors in recent years has been negative. We could be said to be going in the wrong direction. Support for innovation should become a top-priority leverage for reversing this trend, especially in business investment. The Spanish government can call on various direct and indirect mechanisms for favoring business innovation. Without forgetting these other support measures (early-demand projects, for example), in this article we are going to focus briefly on innovation tax incentives provided for in the draft law, particularly important for a sector like ICT that, representing about 5% of the European economy, generates 25% of business R&D investment.

The anteproyecto’s innovation-incentive tax benefits strike us as well conceived in general but unnecessarily curtailed, overly constrained and, in some cases, too long-winded in their effect. Although the effects of an innovation outlay are never instant, they can be more closely synchronized with the proposed tax incentives. The anteproyecto limits these incentives to the innovation investment generated as from this financial year with no back-dated effect, so the rewards are put back to future years. A 20% discount, in our judgment dispensable, is established on tax deductions not applied in the first year of entitlement. Furthermore, tax benefits are limited to job-generating companies, a praiseworthy objective but unrealistic in many business cases. Often, it is precisely companies being forced to shed jobs because of current financial difficulties that stand most in need of aid to modernize their marketed products or services. The anteproyecto also makes tax-benefit eligibility conditional on reports giving grounds for classification of the project as R&D or a previous agreement on estimated expenses and investments of the R&D project. The trouble is that such reports with grounds would probably take a couple of years to produce, debarring the firms concerned from immediate incentive eligibility meanwhile.

The abovementioned drawbacks might be largely overlooked within a general thrust that, as we have already pointed out, seems to be well thought out. A commitment to innovative investment needs to be well planned over time but the tax benefits should be made available as soon as possible in a situation where many firms are being choked to death for lack of funds.

Another important, innovation-related aspect of tax incentives has to do with the revenue obtained from certain intangible assets. Without getting bogged down in technical details, our opinion is that an incentive approach that, once again, is generally sound, could be improved by dealing more appropriately with taxation (business) groups, improving Spain’s fiscal attractiveness while also bringing software into the incentive-eligible trawl of objects.

Finally, a touch of prudence is called for in terms of what we might call the phenomenon of entrepreneurship. We have already expressed our overall agreement with the guiding idea that Spain’s economic recovery model should be driven by entrepreneurship and innovation. Fortunately these are now becoming increasingly widespread terms used in contexts where they would have been inconceivable not long ago. But we do need to be careful of overkill or the danger of creating false expectations around risk activities that are worthy of all support and call for a huge dose of commitment and enthusiasm but do also need a certain know-how and experience that cannot be conjured up at will.